To support the Macao SAR government’s administration reforms, the University of Macau (UM) is nurturing the next generation of public administration professionals with the right skills and mindsets to provide better public services in the big data era. To meet this end, Prof Richard Hu, dean of the UM Faculty of Social Sciences and Distinguished Professor of Politics and Public Policy of the University of Macau Development Foundation, has been working over the past two years with academics across UM to launch new programmes and projects.

UM has over three decades of excellence in providing professional education in public administration, starting in 1989 with its first undergraduate programme in the field. The initial focus was to support the localisation of the civil service during the period of transition leading up to Macao’s handover. Over the years, the university has continued to launch public administration programmes at different levels.

Today, Macao needs to capitalise on the opportunities brought about by the development of the Guangdong-Hong Kong-Macao Greater Bay Area (GBA), and to use advanced technologies to provide better public services, making greater demands on public administration. After assuming office in December 2019, Chief Executive Ho Iat Seng made civil service reform a top priority. To support his agenda, UM established its Public Administration Training Centre in September 2020, with Prof Hu appointed as the chair of the centre’s executive committee, and Prof Shui Bing of the Faculty of Law as its director. ‘As the only local comprehensive public university, UM has the responsibility, and is perfectly positioned, to nurture forward-looking civil servants who can think outside the box,’ says Prof Hu. 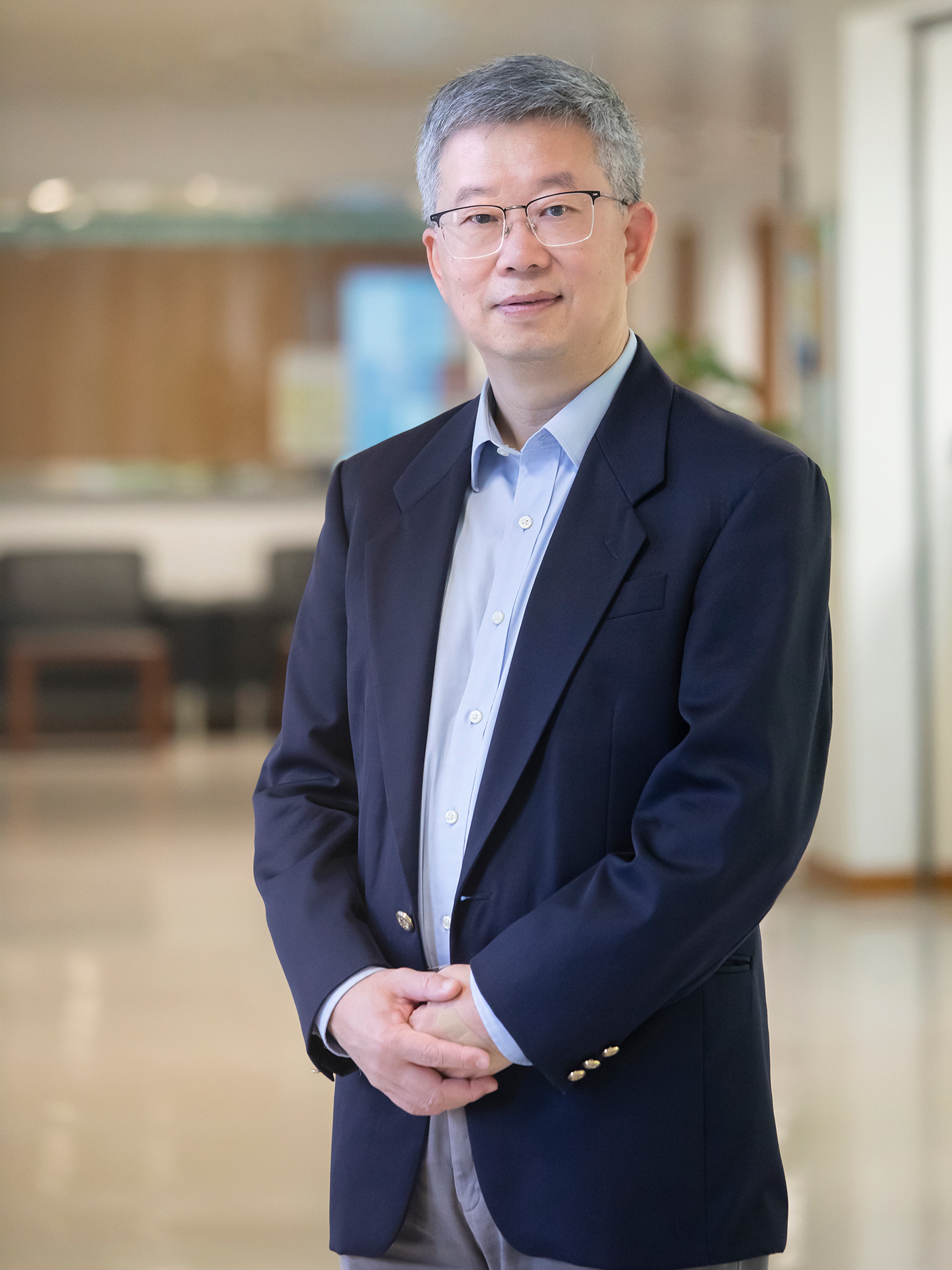 Before joining UM in mid-2019, Prof Hu was the head of the Department of Politics and Public Administration at the University of Hong Kong (HKU), where he taught for nearly 22 years. In Hong Kong, Prof Hu also provided skills training courses to civil servants at the invitation of the Civil Service Bureau of the Hong Kong SAR government. He says that in both Hong Kong and Macao, civil servant training and skills development in government is too fragmented to support meaningful changes. The two cities also lack a comprehensive civil service training college comparable to those in mainland China, Singapore, the United Kingdom, and other countries and regions. Therefore, the Public Administration Training Centre at UM takes a more structured and systematic approach to providing professional and leadership skills training for civil servants in Macao.

Since September 2020, Prof Hu and his colleagues have conducted three editions of a three-month course for civil servants, who took paid time off to live and study on the UM campus. Each cohort included approximately 30 students from different public entities. The course comprised four parts: 1) An in‑depth understanding of the constitution of the People’s Republic of China and the Basic Law of the Macao Special Administrative Region, which aims to enhance participants’ loyalty and sense of belonging to the nation and the SAR; 2) Advanced public administration skills to help civil servants work more effectively; 3) Education in the state of the nation, especially developments and policies related to Macao and the GBA; 4) New technologies such as big data analytics and blockchain and their applications in public administration. The students also had the opportunity to exchange ideas with senior government officials, visit various local government departments, and take field trips to technology hubs in China such as Hangzhou and Shenzhen.

‘I was very pleased to see the growth of the civil servants in our course,’ says Prof Hu. ‘Now they have a much deeper and broader understanding of how the government works and what can be improved.’ He also highlights the importance of the personal networks built during the course to cross-departmental collaboration. ‘Due to some rather strict restrictions on staff movement, civil servants in Macao don’t usually switch their departments. Our course allows them to take a break from routine tasks to spend three months together, so that they can learn more about other departments.’ says Prof Hu. 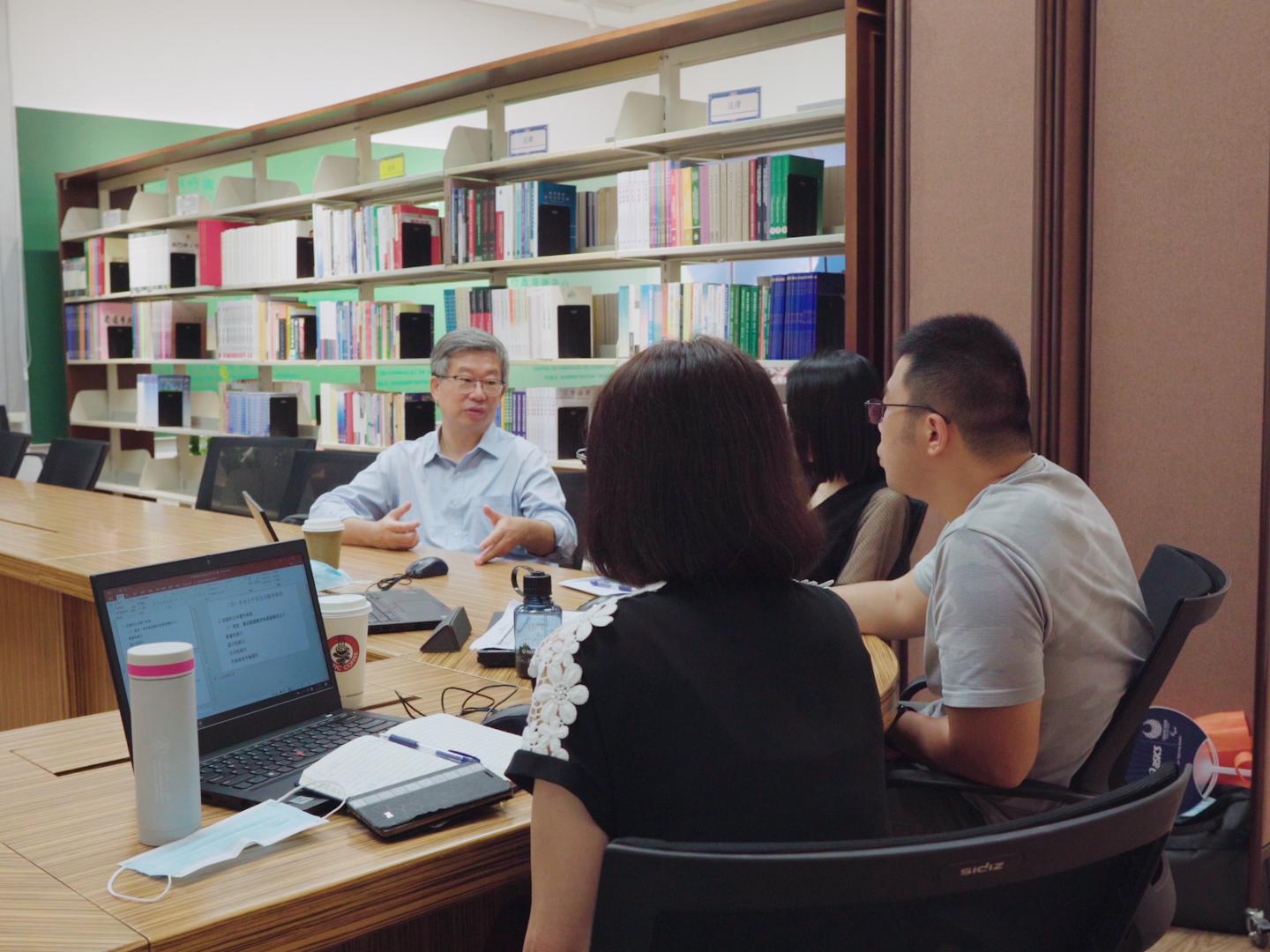 Led by Prof Hu, the FSS has also launched a few new programmes in recent years, including a Doctor of Public Administration (DPA) programme, a Specialisation in Smart Governance for the Master of Science in Data Science Programme, and a Specialisation in Visual Communication for the Master of Arts in Communication Programme. He says the faculty is also working closely with well-known universities in mainland China and abroad to jointly offer undergraduate and postgraduate programmes.

At HKU, Prof Hu’s Department of Politics and Public Administration launched a DPA programme in English, which was the first of its kind in the Greater China region. At UM, he played a leadership role in launching the first professional DPA programme (in Chinese) in the region. ‘Our programme was specifically designed to nurture future leaders, not only for the government, but also for companies and non-governmental organisations,’ says Prof Hu. ‘The programme combines theory and practice and the courses take place in the evenings and on weekends. So students from Macao and neighbouring regions can complete the programme while working full-time, and they don’t have to wait until they graduate to make a real difference in the workplace.’

Prof Hu adds that with the integration of data science and artificial intelligence into public administration, today’s civil servants need to be more tech-savvy than ever. However, there is a lack of data skills in the local government, which is a barrier to developing a mature approach to working with or sharing data. ‘Therefore, the Smart Governance Specialisation in the data science programme will provide students with vital skills in handling, analysing, and visualising data,’ says Prof Hu. ‘We hope they can turn large data sets into insights that can inspire better public services.’

Moreover, the FSS and the School of Public Affairs of Zhejiang University (ZJU) launched a joint research centre for smart government in July 2021. Prof Hu says that ZJU has been instrumental in the use of big data and smart governance in Zhejiang province, which is at the forefront in these areas in China. ‘At the joint lab, we will explore better ways to share data with the government, support policymaking and policy evaluation with data, and apply cloud technologies to make public services simpler and more accessible to the public.’ 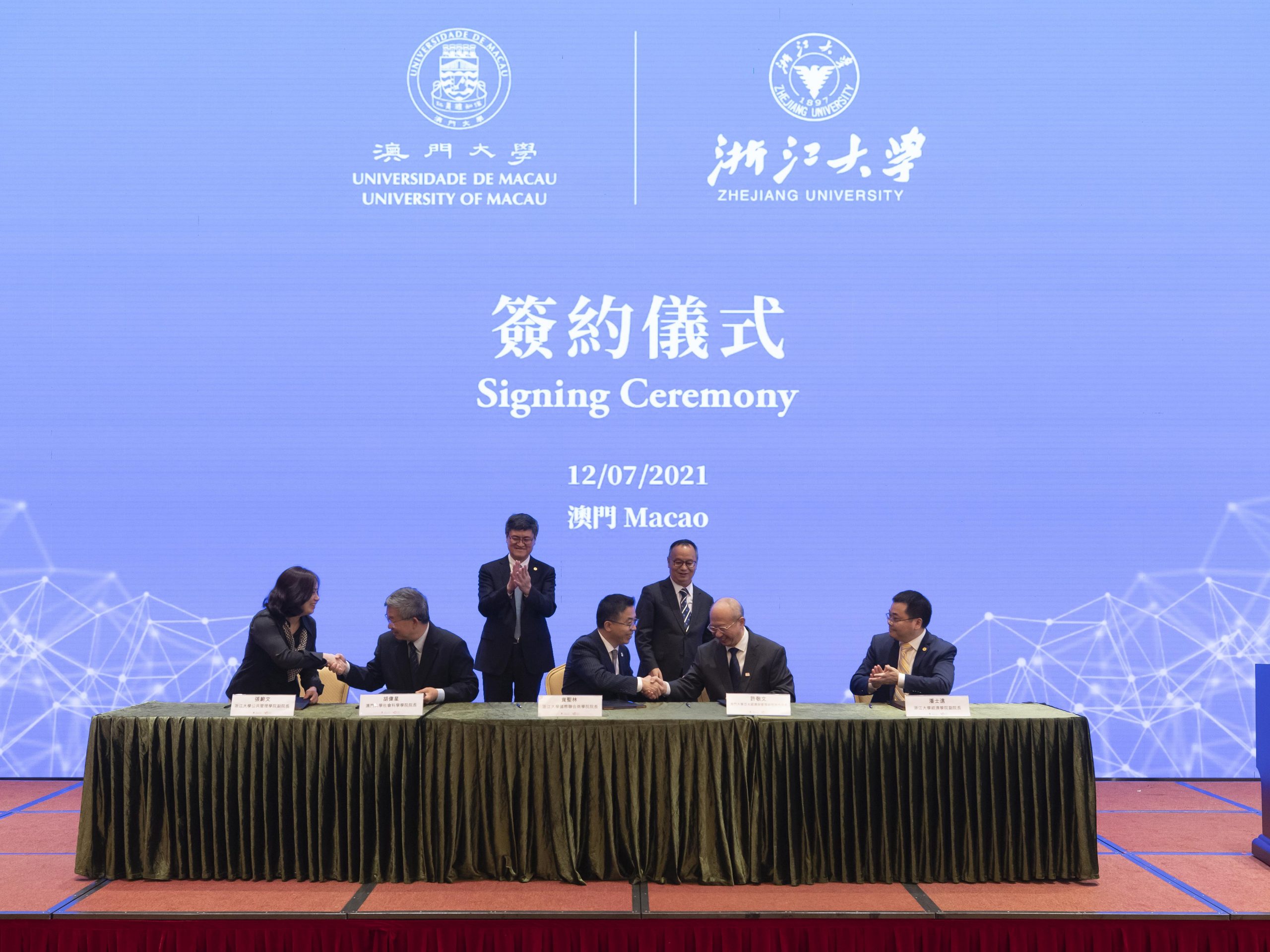 Despite heavy administrative duties, Prof Hu has continued with his research in international relations (IR). In July 2021, his book, Contesting Revisionism: China, the United States, and the Transformation of International Order, co-authored with three political scientists, was published by Oxford University Press. 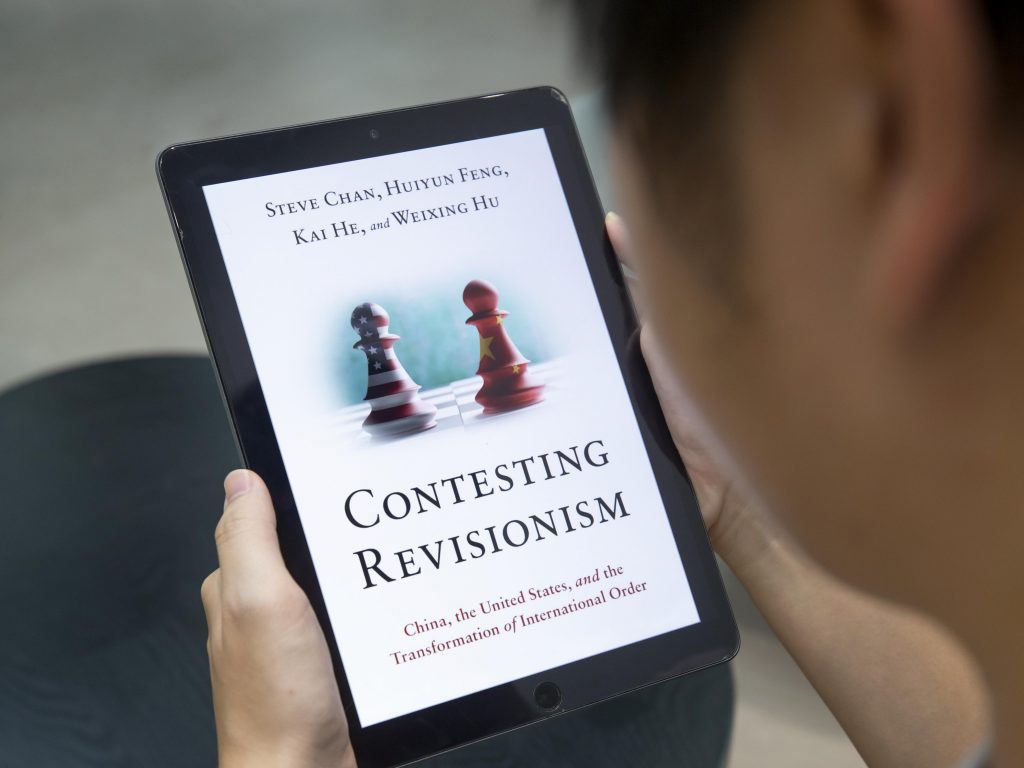 In this new book, Prof Hu challenges the conventional IR theory that sees rising nations as revisionists seeking to overthrow the existing international order or to clash with an existing superpower(s) (otherwise known as status‑quo states). Prof Hu says many scholars and policymakers in the West believe that China fits this traditional description of a revisionist power. The new book rejects this claim with empirical evidence. By comparing the US and China’s adherence to the fundamental principles and institutions of international relations, the two countries’ participation in international treaties and organisations, their patterns of engagement with other countries, and their voting practices in United Nations bodies, Prof Hu and his fellow authors suggest that a rising power is not necessarily revisionist. Moreover, they argues that the US, as a status-quo power, has continued to undermine the international order which was established in the aftermath of the Second World War.

‘Whether a rising power is revisionist depends on how much stake a country has in the current international order, and what benefits it stands to gain from it.’ says Prof Hu. ’A lot of evidence suggests that China is a strong supporter of the international order with the UN System at its core. Under this international order, China has seen huge developments and economic gains in the past several decades. In recent years, we have also seen China’s increased participation in global governance and international bodies. These facts all point to one conclusion: China is not revisionist as described in the conventional international relations theory.’

Prof Hu is also trying to connect scholarship in international relations and public administration in Macao and the GBA. As the director of the FSS Centre for the Guangdong-Hong Kong-Macao Greater Bay Area Studies, Prof Hu seeks to draw valuable lessons from international practices, especially those in the European Union, to inform further integration within the GBA.

Under the ‘One Country, Two Systems’ principle, Guangdong, Hong Kong, and Macao follow different economic and legal systems despite being parts of the same country. To promote the flow of goods, capital, and personnel across the GBA, Prof Hu is studying how countries in the European Union have designed and implemented practical solutions to related issues. ‘These are not only research topics for IR scholars, but also important issues the governments and think tanks in the GBA should consider,’ says Prof Hu.