Abstract
Russia is a country which belongs to both Asia-Pacific and Europe. It is also located at the heart of the Eurasian continent. Russia is a unique civilization – being culturally a European nation it shares moral principles endemic to Oriental culture, from traditional family values and collectivism to tolerance, compassion and self-sacrifice.

Russia has the world longest land border with Asian nations – Kazakhstan, China and Mongolia. Historically it was closely linked to Asia. The Soviet Union strongly supported Asian nations in their struggle for independence and tangibly assisted their economic development.

The Asia-Pacific dimension has been Russia’s foreign policy priority for a long time. These days, as a strategic partner of China, India and ASEAN and member of Shanghai Cooperation Organization, APEC and East-Asian Summits, Russia is rapidly integrating itself into the Asia-Pacific economy. Meanwhile together with its close allies Moscow is developing Eurasian Economic Union, actively shaping Greater Eurasian Partnership.

Bio
Mr. Kirill BARSKY is Ambassador-at-Large of Ministry of Foreign Affairs of the Russian Federation. He joined diplomatic service in 1989. Since then he has occupied various positions in the Foreign Ministry Headquarters, at the Embassy of the USSR/Russia in the Peoples’ Republic of China and Permanent Mission of the Russian Federation to the United Nations in New York. He is an author of numerous articles on history, culture, domestic and foreign policy of China, security in the Asia Pacific region and Russia’s diplomatic history. 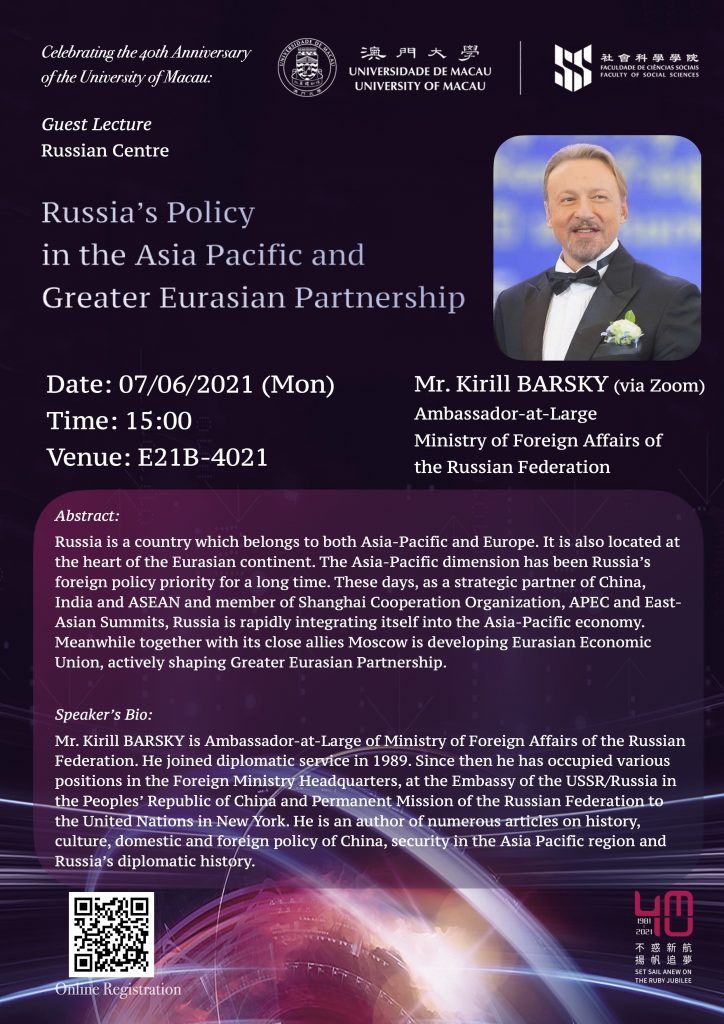